Campsites around the Austrian lakes

What is more pleasant than camping in the Alps with a beautiful lake within reach? We drove past some of the Austrian lakes, looking for campsites where you can immerse your feet in the fresh water after a mountain hike.

campsites in this area

That is too many to show.

No campsites found in this area for Campsites around the Austrian lakes.

all campsites in this mapview

The Plansee is located on the northern border of Tyrol , just across the border with Germany: a beautiful, elongated lake. And although the really high mountains lie more in the southern half of Austria, you are already beautifully surrounded on all sides by imposing mountain walls. The lake is fairly popular because you have beautiful beaches in a few places, from where people swim, supp, sail or canoe. 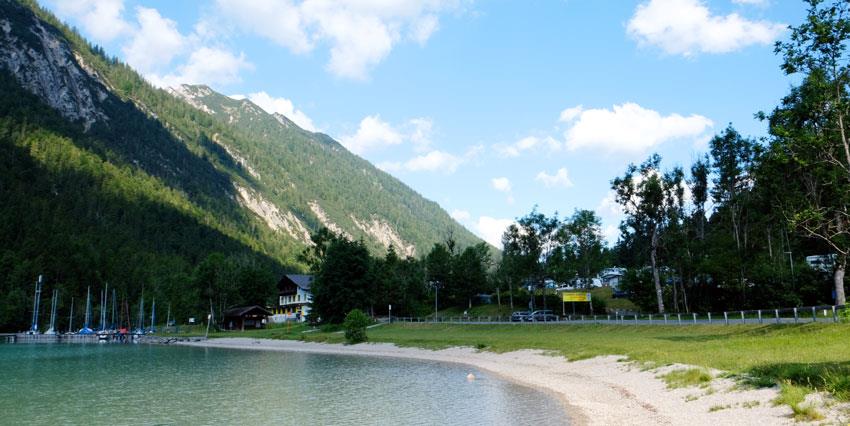 Camping Sennalpe is larger and more luxurious and is located on a beautiful, spacious beach. But there are a lot of permanent (mobile) caravans here where your tent looks a bit lost in my eyes.

A little further east in Tyrol lies the Aachensee with the village of Pertisau. Here are two campsites close to the lake: the most northerly, close to the water, Achensee Camping Schwarzenau and a little more to the south you will find Seecamping Wimmer. Both are also close to the main road - with limited space between mountains and water, there is really no escaping this.

view on the map Both campsites are relatively small and you will receive a friendly welcome at both. Good to know: of the two, only Schwarzenau is really on the water, from Wimmer you don't just roll out of your tent into the lake.

A small lake: the Walchsee in Tyrol

North of Kitzbühl lies Lake Walchsee, with only one campsite on its shore: Ferienpark Terrassencamping Südsee.

The Zeller See is a not too big lake in Salzburg. Here too, the surroundings are beautiful, albeit slightly more open: the lake is less tight between the slopes than the Plansee or Aachensee. There are two campsites close to the water: Campingplatz Seecamp and Panorama Camp Zell Am See.

Campingplatz Seecamp is located on the north side of the lake: a well-kept campsite with a full restaurant and shop. You do not come here for noticeably beautiful places - for that matter this site is not special. The asset of Seecamp is its location right on the water, with its own pier and a beach / boulevard, where you can be at a glance from the entire campsite.

Panorama Camp Zell Am See is located on the south side of the lake. This campsite is somewhat smaller and simpler than Seecamp. All in all it is a bit more pleasant. The terrain is farther away from the water, but there is a five-hundred-meter footpath from the campsite to the lake. Here too everything is fine, you just have to do without a restaurant or shop. On the other hand, there is a somewhat calmer atmosphere at the campsite.

You can easily overlook the Tristacher See in Tirol it is only a very small lake that lies a bit on its own, far from famous places such as the Wörthersee. Camping Seewiese is the only place where you can camp.

Please note: the campsite is not located directly on the water you will have to use the adjacent natural 'pool-in-the-lake', which is also accessible to other visitors.

Camping above the tree line

Camping Zeinissee is located above the tree line, on a small reservoir. Small and simple but with a beautiful location.

The elongated Weissensee in Carinthia is known in the Netherlands for the Alternative Eleven Cities Tour which is held there every year in January. But also in the summer it is a beautiful destination with lots of hiking opportunities in the area, for example in the Naturpark Weissensee.

On the west side of the elongated lake is Seecamping Weissensee, a simple but spacious terraced campsite. From many places you have a beautiful view of the water and the surrounding mountains. The campsite itself has a well-laid out beach with play facilities, and is an excellent place to combine walking with playing on and near the water.

Entirely on the other side is Camping Ronacher, tucked away deep in the pine forests. If you are on the receipt and want to check out the other campsite for a little while, you will have to make a detour of more than sixty kilometers, which will take you around an hour. It is a neatly laid out site in itself, next to the lake, but bear in mind that this place is in the Naturpark Weissensee quite far away from shops and other life.

The transition from Lake Weissensee to Lake Ossiach (also in Carinthia) is rather large. As quiet as the first is, so busy is the last. There are therefore many campsites around the lake. And because it is so popular, its banks are well used, so the campsites are often more or less sandwiched between hotels and other occasions. It is beautiful here, but people do not know 'remote' here.

All the way to the west is Campingbad Ossiacher See, a fairly large site. Further along the south bank, a whole row of campsites has nestled , all against the water.

The one that stands out in particular is Seecamping Bergdorf. Here you stand among a lot of mature greenery and under old trees, largely on nicely laid out terraces (the supermarket at the front of the campsite does not really do justice to the beautiful grounds that lie behind it). There are sufficient facilities. The access to the lake is also excellent, especially in combination with the playground equipment that is located nearby. Although the terrain is close to the road, I hardly noticed it at the end.

You will also find some campsites at the eastern end, of which I particularly noticed the Camping Kalkgruber campsite: a small and simple farmer's campsite. The main road runs pretty close by and the campsite does not border directly on the water. As a result, it may not be ideal for smaller children, but for some that is just another plus. If I am in the area again, I will stay overnight without hesitation.

The Faaker See is a fairly small but quite touristy lake where people like to come for a swim. The southeastern shore in particular is full of restaurants, super and surf schools, bicycle rental companies and more. Directly on the water there are two campsites under the tall pine trees. Camping Arneitz is the richest equipped of the two, with a restaurant, bar, all kinds of events and a well-prepared children's playground. Directly next to it is Strandcamping Anderwald: less lavishly equipped and smaller. Both campsites have direct access to the lake.

The Wörthersee is one of the most famous lakes in Austria. And the most luxurious. It is also called the Riviera of Austria and, to be honest, that is not an exaggeration. The banks are littered with large villas, luxury apartment complexes, health centers and things behind high, impenetrable gates - probably even more villas. On the day of my arrival, I landed in the middle of a procession of exclusive sports cars that did their best to drive through the town as slowly as possible while making as much noise as possible. Crowds of people were enthusiastically taking pictures. Nice to see, but all in all not really a camping environment.

view on the large map At the eastern end you have Campingplatz Klagenfurt, just behind the Strand Bad. The only other camping spot is a remarkably simple camping site that is striking for this environment, Camping Weisses Rösl. It is located a little higher on the slope of the - somewhat less high-lying - south bank. In fact, it is not much more than a sympathetic lawn with a gravel path and some caravans and tents on it. But that is a relief in this very luxury-oriented area.

Very modestly located just south of the Wörthersee Lake Keutschacher See. No expensive hotels or villas here, but a handful of campsites right on the water, including three (FKK) nudist campsites. 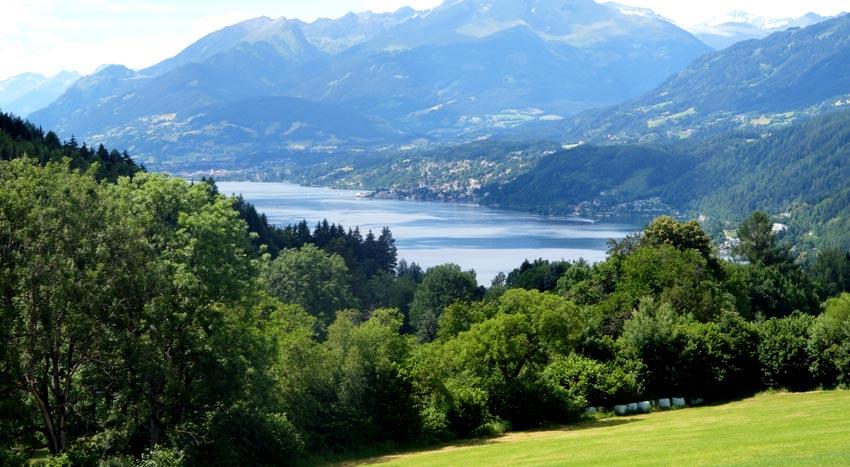 The Millstätter See is also a beautiful lake, with beautiful cycling and walking possibilities in the area. Three campsites are located close to each other in the southeastern corner of the lake: Camping Brunner Am See, Seecamping Mößler and Campingpark Burgstaller. They do not seem to outrun each other very much in design, although Brunner is clearly the one with the most entertainment (it is also the only one of the three that is not directly on the water's edge). And all three are in a pretty popular corner of the lake - it is not very quiet.

A little further on the same bank is Happy Camping Golser, where it is a bit quieter. This site is relatively simple, tidy and has its own access to the lake. 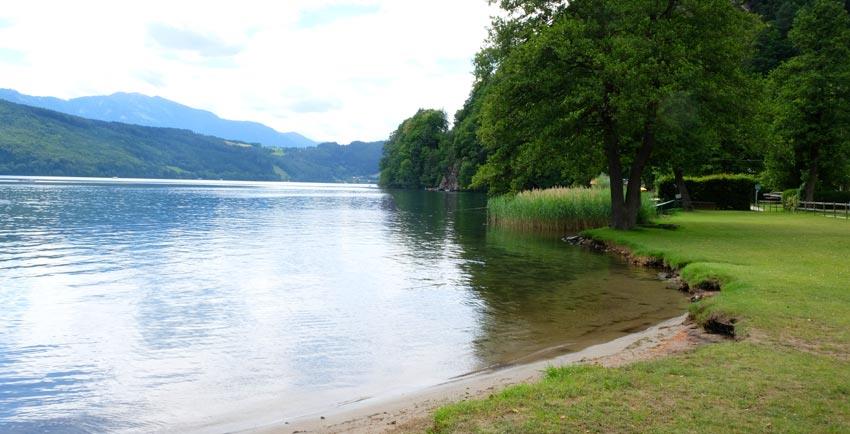 Welcome to the 5-star campsite at Lake Reintal in Kramsach, Tyrol! Camping Seeblick Toni has delighted guests from far and wide for 50 years, has been awarded by numerous international camping guides,... >> Campsite directly on Lake Hallstatt. We live here in the middle of an intact Alpine landscape, surrounded by the romantic villages, Hallstatt, Obertraun, Bad Goisern and Gosau, Alt Aussee, Grundlsee a... >>

Our campsite is located in the heart of Carinthia, directly on the beautiful Ossiacher See. In the midst of a fantastic backdrop, it is framed by the Gerlitzen Alpe in the north (1,911 m) and the Ossi... >> 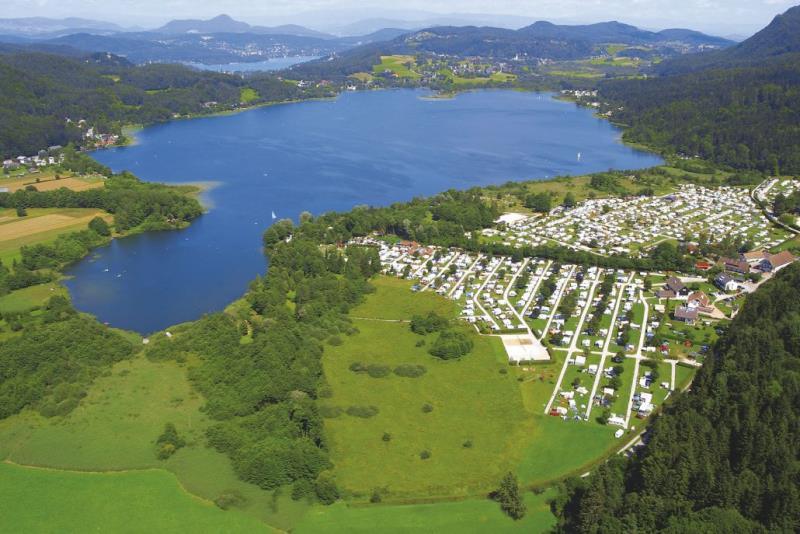 Our naturist campsite Müllerhof offers you three beautiful accesses to the cool water of the Keutschach. In a relaxed summer atmosphere, guests can relax here - on the lawn and on the jetty. While fam... >> 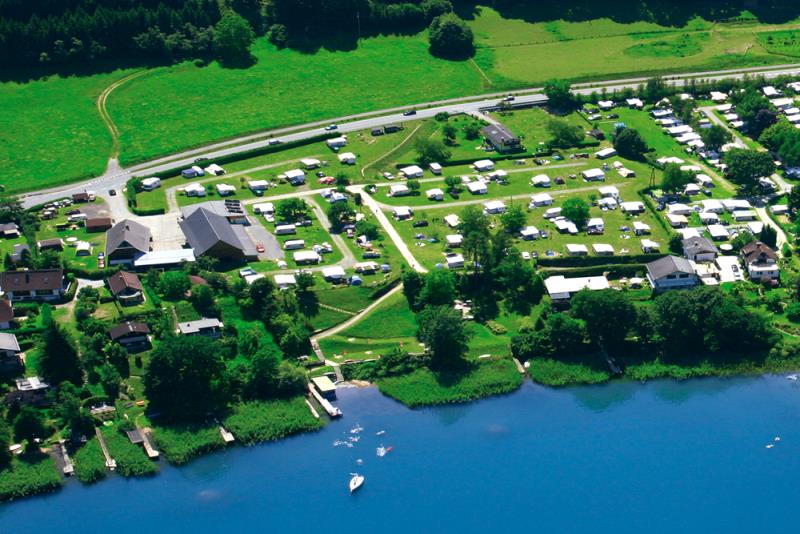 Experience beautiful days - in one of the most beautiful landscapes in Europe - right on the Ossiacher See! Family run and easy to feel. Perfect price / performance ratio. Dogs, rabbits, hamsters and ... >> 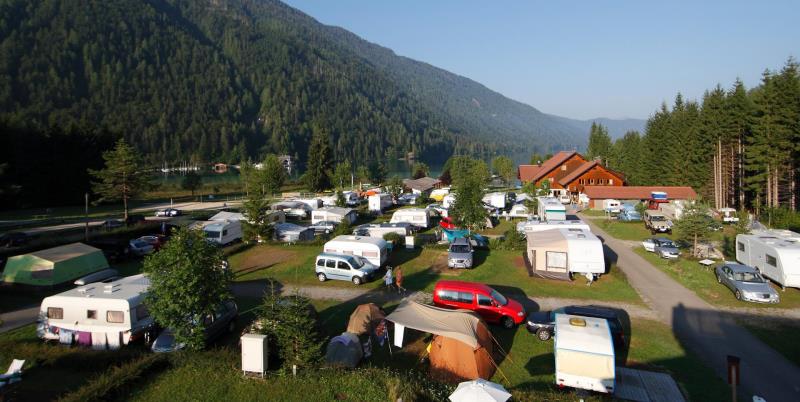 Camping, Apartments & Restaurant directly on the east bank of the Weissensee! An alpine lake with drinking water quality is waiting for you! We fulfill your dream vacation - relaxation in one of the m... >> 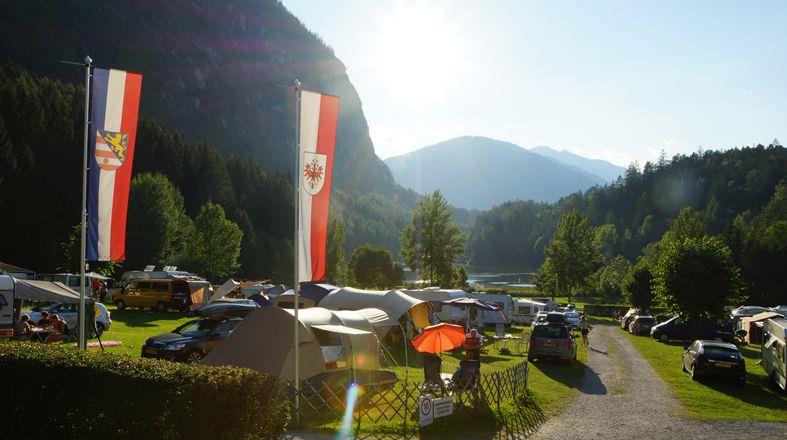 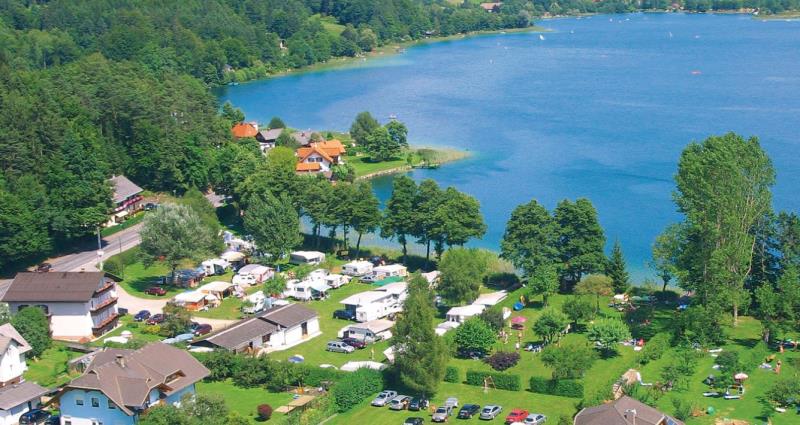 Camp like in a picture book. A campsite - directly on the Keutschacher See - with plenty of space for the whole family. Well-maintained sanitary facilities, beautiful meadow areas, garden terrace, caf... >> 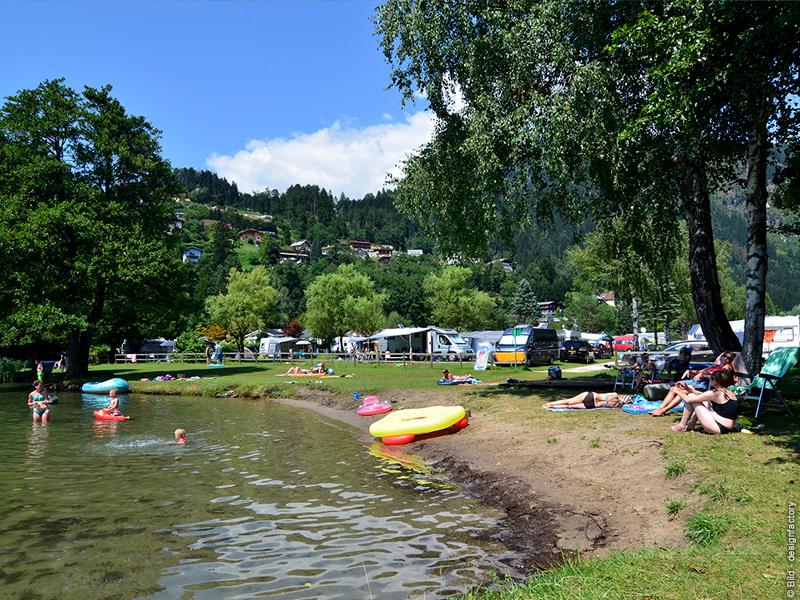 Our campsite, located directly on the Millstätter See, is embedded in the Millstätter Alpe with its many huts to wander around and the mighty Mirnock power mountain. Enjoy your holiday in a familiar, ... >>

Peaceful, personal family campsite on a slightly sloping meadow with trees and sun. Idyllically situated next to the nature reserve between the Ossiacher See and the Gerlitzen Alpe. Large lawn with sc... >>